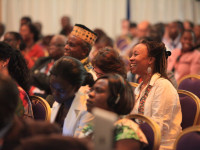 When the past and the future come into conflict, it’s often the future that wins. The past is fragile by nature and easily swept away, yet it is often to a lost past that we look for inspiration in building the future.

At the eLearning Africa Plenary Debate, this dispute will be played out as our four speakers lock horns over the motion “This house believes inclusivity is more important for Africa’s future than tradition”.

There is much to learn from tradition, especially where education is concerned. In fact, the desire to preserve the past is perhaps the origin of many traditional cultural practices, which are often ways of transmitting the knowledge of older generations to younger people.

Africa’s educational heritage includes ancient and modern literary traditions, a wealth of orally transmitted knowledge, and some of the most venerable educational establishments in the world – including perhaps the oldest continually operating university.

Of course tradition also bears importance in other societal activities. In traditional agricultural practices, for example, we can find solutions to desertification and drought; in traditional structures of social organisation are impressive examples of good governance and local democracy.

As Foster Ofosu, who will oppose the motion, puts it:

“Africa cannot transform itself until it learns to understand and embrace its traditional values and practices and finds a way to weave these into every aspect of development. To think that tradition is static and incompatible with transformation is the greatest disservice Africa can do to its peoples and their heritage.  The way institutions are created and managed, the way technologies are developed and diffused, the way we acquire knowledge – indeed every aspect of Africa’s transformation must be inextricably linked to traditions. If we assume that development must be people centred, which I believe we all do, how could one even think of development without understanding and integrating local traditions and values?”

Of course, the word tradition has an uglier face. To a moderniser, “tradition” can come to symbolise all the persistent aspects of oppression and exclusion that stand in the way of progress. In this debate, where inclusivity comes up against tradition, we must also think of the ways in which traditional structures can hinder full participation in society.

Maggy Beukes-Amiss, who proposed the motion, cites many examples of traditions that are “holding back inclusivity in general and specifically in Namibian education”. These include the perception of science as a boys’ subject; a “lack of clear policies on equal rights resulting in certain groups feeling excluded in society by interpretation”; the concept of the husband as “head of the house”; and the fact that “highly qualified women feel excluded – as they are perhaps seen as a threat or too independent”.

“Traditional values contribute to inclusivity, but can often be abused to hold it back”, she says. “There is a paradox … meant to influence one another in a positive manner, in the above-mentioned traditions and traditional values, they are sometimes used, interpreted, or perceived to lead to exclusivity rather than inclusivity.”

With the publication of the UN’s Sustainable Development Goals for 2030, this subject is of topical importance, with the target of goal 4 to “ensure inclusive and equitable quality education and promote lifelong learning opportunities for all”.

The poor attendance of girls in school relative to boys across most of Africa can be attributed in part to traditional structures of gender dominance. Traditional ways of life can also be a barrier to education: Nomadic peoples, for example, find it much harder to ensure what we might call a “traditional” education for their children.

The use of the word “traditional” here brings up one of the most contested issues in the eLearning community today – one we can be sure our debaters will argue fiercely.

Some see eLearning as disruptive by nature: a way of sweeping away traditional structures of education that have failed, and establishing a new and more inclusive model. For others, eLearning is a supplement to tradition, a new tool by which traditional education can be strengthened and maintained.

It is certainly true that many look at the education statistics and judge that the traditional model of classroom education, with all the costs, complications, and logistical problems it entails, has failed. And while technological infrastructure in Africa still needs to expand (as it is rapidly doing), the cables, pylons, and networks spreading across the Continent offer the most obvious solution for the expansion and promotion of education by new models.

But we also find that telecommunications can support and nurture tradition, promoting the sharing of agricultural practices, for example, or allowing for the recording and wider dissemination of knowledge that has so far only been transmitted orally.

So which argument is stronger? Join us at the plenary debate on Thursday, May 26 at 17:30, where four engaged experts will marshal their most potent, persuasive plaidoyers. Dr Harold Elletson, editor of the eLearning Africa Report, will be in the chair to moderate the emotionally charged event.

Dr Maggy Beukes-Amiss, Director of the newly established Centre for eLearning and Interactive Multimedia at the University of Namibia, with over 17 years experience in teaching ICT-related subjects, and

Dr Amany Asfour, President of the Egyptian Federation of Business & Professional Women and Secretary General of the African Society for Scientific Research and Technology (ASSRT), who among her many achievements has founded the African Training Center for Women and Youth Entrepreneurs and support of Small and Medium Enterprises

Presenting the case for tradition are

Foster Ofosu, Capacity Development Specialist at the African Development Bank Group, who has coached and supported individuals and institutions in Africa on the application of ICT and innovations, and

The debate, naturally, involves and invites audience interaction and will be settled by vote at the end. So come and join us in the Excelsior Ballroom of the Royal Maxim Palace Kempinski Hotel in Cairo for an evening of lively and passionate discussion.