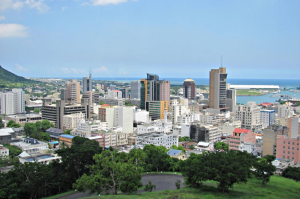 The first Europeans to have visited Mauritius were the Portuguese at the beginning of the sixteenth century. In 1598, a Dutch naval expedition landed in a sheltered bay on a volcanic island in the Indian Ocean. Its members decided to name the island after the fleet’s main vessel, the “Mauritius”, which in turn had been named after Holland’s Prince Maurits van Nassau. They introduced sugar cane and the Java deer.  After the Dutch left in 1710, the French occupied the island and renamed it “Isle de France”.

Today, the Republic of Mauritius has an estimated population of 1.3 million; its capital is Port Louis. The island nation enjoys a tropical climate influenced by the southeast trade winds. It is known for its multicultural society composed of different religions (Hindu, Christian, Muslim) and ethnic groups (Indian, African, Chinese) living together in harmony. The major languages are Mauritian Creole, French, English and Bhojpuri, with English being the official language of the National Assembly. The Civil Legal System is based on French Civil Law with some elements of the English Common Law. The country gained independence from the UK on 12 March 1968 and became a republic in 1992. It is ranked a “full democracy” by the Economist Intelligence Unit. The current president is The Honourable Ameenah Gurib-Fakim, the first woman to hold this position. The Prime Minister is The Honourable Pravind Jugnauth.

Mauritius is ranked as the most competitive economy in sub-Saharan Africa, with a very high GDP per capita. The country’s economy is based on various sectors including the sugar and textile industries, tourism and financial services. Mauritius is one of Africa’s most popular tourist destinations. It is famed for its natural beauty, with sandy beaches, crystal clear turquoise lagoons, the omnipresent sugar cane fields and breathtaking summits and valleys. The tourism industry, as one of the main pillars of the country’s economy, is vital for its economic development. The sector attracts revenue and is responsible for the creation of 70,000 direct and indirect jobs. Hotels in Mauritius are of generally high standard and welcome tourists from all over the world.

Sugar still is one of the most important contributors to the Mauritian economy. Around 72,000 hectares of land are dedicated to sugarcane. According to experts, 600,000 tonnes of sugar are produced annually, with somewhat more than 80% exported to Europe.

The government is striving to modernise the economy through Information and Communication Technology (ICT), hospitality, and property development. Mauritius has completely revamped its ICT industry and now boasts Africa’s highest ITC development index.

Since the country’s independence in 1968, the Mauritian education system has generally been based on the British model. However, considerable changes and enhancements have been made over time. The government provides citizens with free education toward the goal of improving their opportunities in the labour market.

Children attend the six grades of primary school between the ages of 5 and 11; the secondary level goes from grade seven to grade twelve. According to statistics, the adult literacy rate for both genders is estimated at 90.6% (males 92.9%, females 88.5%).

According to the Mauritian Board of Investment, the government’s Economic Vision 2030 foresees transforming the ICT sector into a key industry. A strategy has been designed to enhance innovation and creativity and to provide Mauritians with more accessible high-level opportunities. One of the major aspects of this strategy is to make Mauritius a “smart island” based on digital connectivity. Among the achievements is the country’s high-tech infrastructure, especially the Ebene Cyber City, which delivers high-speed internet and backup electricity generators to bridge frequent power cuts.

The adoption of eLearning

Primary schools in Mauritius have been introduced to digital education through the Sankoré Project, launched by DIENA (Délégation interministérielle à l’éducation numérique en Afrique). The effort empowers teachers to create, use and share digital resources. Furthermore, the Civil Service College Mauritius E-Learning System (ELS) was launched in March 2016 for Public Officers, providing them with short, practical online courses that complement traditional face-to-face offerings, The system was designed by the Ministry of Civil Service and Administrative Reforms in collaboration with the UNDP and helps Public Officers learn at their own pace. The government firmly believes that ICT facilitates the acquisition of knowledge and thus fosters and bolsters Mauritians’ personal and professional development.

The eLearning Africa 2017 conference will be hosted Balaclava, Mauritius on 27th – 29th September.

Foto by Ashok Prabhakaran under the following CC License