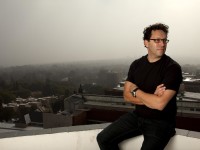 “What after all is innovation? It’s finding a new way to do something, or provide a service, sometimes entirely novel, sometimes combining two existing things.”
Toby Shapshak, keynote speaker at this year’s eLearning Africa, columnist, strategist, editor of Stuff.com Magazine and contributor to CNN, The Guardian and Forbes, believes Africa is a mobile-driven continent. He shared some of his insights with us regarding innovation at the cutting edge in Africa.

It is already the most overused word since Web 2.0, so how can we take anything that involves “innovation” seriously anymore?

Just about everyone has expropriated the word as an inexact synonym for everything from rebranding products to launching new financial services.

While in some instances it might be true – South African banks like FNB provide clever services and apps, for instance – mostly “innovation” is a tired, misappropriated and sadly misunderstood word. But not everywhere.

In some places, innovation is thriving. There’s a phrase that you’ll hear in a myriad of industries – from high-tech start-ups to global restaurant chains – which quite correctly argues that innovation happens at the edge.

Of course it’s happening at the edge, the middle is contentedly watching television and smugly playing Angry Birds. The biggest edge in the world right now is the developing world, especially Africa.

What after all is innovation? It’s finding a new way to do something, or provide a service, sometimes entirely novel, sometimes combining two existing things. But always, solving a problem.

For want of a better word, let’s call it innovation. Because that’s what it is. In Africa, we’re seeing innovation of the purest form: innovation out of necessity.

If you have a problem to solve, you solve that problem. Just ask any of the one billion people who live in Africa and for whom daily problems are forgotten, taken-for-granted services such as constant electricity, superfast internet access, running water, e-commerce delivery and how to eat every day.

African entrepreneurs have created ways that allow farmers to check where they can get the best price for their produce (M-Farm and Farmerline), fishermen to be warned about storms, people to check whether expensive medicines are expired or still active (mPedigree), and rural cellphone users to send mobile money to each other using text messages (M-Pesa). Even the pay-as-you-go payment system was pioneered in Africa by Vodacom in the 1990s.

Africa is at the forefront of the world’s innovation frontier not because it wants to be, but because it is the epicentre of some of the most pressing problems that the developing world is facing.

The next great genius that will be heralded around the world will not be a Steve Jobs or a Mark Zuckerberg, they will be a Nikola Tesla or a Thomas Edison.

The biggest problems the world will face, which the developing world faces right now, are access to power. More people in Africa have a mobile phone than access to electricity.

Fossil fuels are expected to run out sometime in the next hundred years and have already spawned a volatile, war-starting, corruption-enabling mega-industry.

The nuclear power industry is never going to be widespread or improve on its massive radioactive waste output, to be an efficient, economical alternative. Nor will disasters such as Chernobyl or the Tsunami-exposed incompetence of Japanese power utilities help the cause.

Along with food security and access to water, these are the three big global problems that future world wars will be fought over. Just like a science fiction graphic novel 2000AD, our descendants in hundreds of years will fight wars over water, food and power.

There is, incidentally, the South African-born genius revolutionising the two biggest dependents of the oil economy: motor cars and homes. Elon Musk, the Pretoria school boy who sold PayPal to eBay, is now building multiple other empires: in electric cars with Tesla, space-flight with SpaceX and solar-power with Solar City.

And, when an over-budgeted, slower-than-air-travel high-speed rail link between San Francisco and Los Angeles irritates him, he comes up with a sci-fi alternative (called a Hyperloop) that will cost a tenth of the price.

Musk will come a close second to Jobs and Tesla when historians calculate which man has revolutionised the most industries.

While Tesla’s eccentric brand of genius and fear of being duped into selling his patents (which was done to him by both Edison and Westinghouse) meant many of his industry changing ideas never made it to market, Jobs’ legacy is certain.

First he revolutionised the personal computer with the Macintosh, then digital (iTunes) and portable (iPod) music, adding in smartphones (iPhone), tablets (iPad) and the apps economy that now run all of these.

Musk has micropayments (eBay) under his belt, but is triumphing in electric cars (Tesla now has 8% of the US luxury car market) and space travel (SpaceX has docked and returned from the International Space Station, and his Grasshopper craft has taken off and landed vertically).

His Solar City concept is profoundly innovative at the business level. Given Musk’s history in start-ups, which require massive upfront funding with little visible sign of success for several years, he is comfortable, in a way most traditionally inclined and profit-conscious entrepreneurs aren’t.

Solar City pays for the costly installation of solar panels and transformers on individual homes, but retains ownership of the equipment and the output.

When the homeowner has received their allotted amount of electricity, the overflow is redirected back into the power grid where Solar City gets the income. It’s a win-win for homeowners who get free electricity for life and the risk-taking installer.

But he’s not the only one innovating with power. William Kamkwamba is arguably the most famous innovator to emerge from Africa having built a windmill from recycled bicycle parts using an encyclopaedia from a library.

His life story is aptly summed up in his biography, called The Boy Who Harnessed The Wind, and is labelled a real-life MacGyver by The Daily Show.

Mobile phones are one of the great success stories of the world and nowhere is this more evident than in Africa. Africa is the world’s fastest growing telecoms market, second in size to Asia.

It’s no surprise that some of the smartest innovations are appearing on mobiles. Everyone knows about the money-exchanging wonders of M-Pesa and the real-time tracking done by Ushahidi – the two most-often cited examples of African innovation.

But the continent is awash with good examples.

mPedigree is a clever, SMS-based way of verifying if medications are real and not expired. Invented in Ghana, a user simply scratches off the foil covering a unique code on each box of legitimate (not counterfeit) medicine and SMS’s that number to get the verification.

Also in Ghana, a service called Farmerline sends farmers basic, but enormously useful, information and advice. Kenyan startup M-Farm allows individual farmers to pool their buying and selling to give them more leverage to get better prices for their harvest, and lower prices when they buy seeds or fertiliser.

In Kenya, arguably the most innovative country in terms of mobile services, there are fantastic services such as iCow that help diary farmers become more profitable and rise out of poverty. The diary business in Kenya is worth $463-million a year, meaning it can turn subsistence farmers into abundance farmers – all using the most basic of phones because the communication is all by SMS.

Africa is often called a mobile-first continent, but it actually is a mobile-only continent.

Toby Shapshak is editor-in-chief and publisher of Stuff magazine (stuff.co.za) in South Africa. His TED talk on how Africa is solving real problems has had over 1,4-million views; and he has been featured in the New York Times. Follow him on Twitter: @shapshak